Athina Chatzipetrou is a charismatic leader, who heads the Greek Archaeological Resources Fund as Chairwoman of the Board since November 2017. The A.R.F (Τ.Α.Π) is the public organization responsible for managing the proceeds of the museums and archaeological sites of Greece, as well as their overall promotion and the expropriation of real estate for archaeological purposes.

Mrs. Chatzipetrou has previously spent a solid 27 years in the private sector. She has been awarded a BSc in Business Administration and an MSc in Operational Research, along with several other leadership and management academic certifications. Her career includes senior financial management positions in numerous sectors and industries with particular emphasis in finance, administration and project management, with a track record of successful restructurings and delivering results according to shareholders’ wishes. She has been employed in senior roles of well-known multinational companies in Greece such as PwC, Johnson & Johnson, and has held the CFO role in Coca-Cola, Beiersdorf (Nivea) and Toyota.

She has also gained consulting experience as Minister’s Advisor and as Resident Advisor of the United Nations Economic Commission for Europe (UNECE) in Geneva and RvO in the Netherlands, where she demonstrated the ability to identify and cultivate new opportunities providing strategic advice for the implementation of reform programs.

Her high energy professional style is considered to be flexible, adaptive, and with the ability to work well in fast-paced environments. Her leadership experience is characterized by the ability to interface with Board members and senior management on technical matters in a layman’s language, to communicate clearly and generate buy-in from “stakeholders” and to operate effectively across departments with a strong record in building and managing teams.

Finally, she is perceived as a persuasive communicator, experienced to handle executive and difficult audiences with readiness and in an adaptive way.

In her current capacity, Mrs. Chatzipetrou succeeded in less than eight months to establish the e-ticket solution in eleven archaeological sites and museums with vision, resilience and efficiency, setting an important milestone for the dissemination of Greek culture.

The plan to introduce e-ticketing existed for years, but the hard part was its implementation since several delays made the time plan stifling. Nonetheless, Mrs. Chatzipetrou managed to deliver the project in just six months, which is a record time for a public organization to successfully complete a project of that scale.

A.CH. “The e-ticket encourages everybody to discover and explore our cultural heritage and stimulates the sense of European identity and belonging to a common European space. This is its deepest value.”

The electronic ticket is operational in the eleven most important archaeological sites and museums of Greece that account for 50% of the income of ARF, namely Acropolis, Ancient Agora, Roman Agora, Olympieion, Adrian’s Library, Kerameikos, Lyceum of Aristotle, Knossos, Archaeological site of Messina, Messina Ancient Museum, Archaeological Museum of Heraklion.

Since its introduction in July 2018, the e-ticket is a new reality for 1.5 million visitors generating revenue of 30 million euros for the ARF and the Ministry of Culture.

A.CH. “It is vital that, for the first time, we have access to data and data analytics functionality to better control, but most importantly to better plan our policymaking. As heritage is related to values, let’s embrace the value of digital technology and let it lead us to the new era.”

This was the first milestone for Mrs. Chatzipetrou as head of the ARF. However, her vision does not include only the e-ticket. Her vision is elaborated in the ”roadmap” she designed for ARF, which she is meticulously following and includes the creation of modern gift shops and kiosks for food or coffee that their design and content will make them attractive destinations on their own.

A.CH. “We, in the ARF have a new “visitor-centric” vision. All of us, who are involved in managing culture, must focus towards the awakening of the society on the value of culture, as it adds “value” to the modern society we live in.” 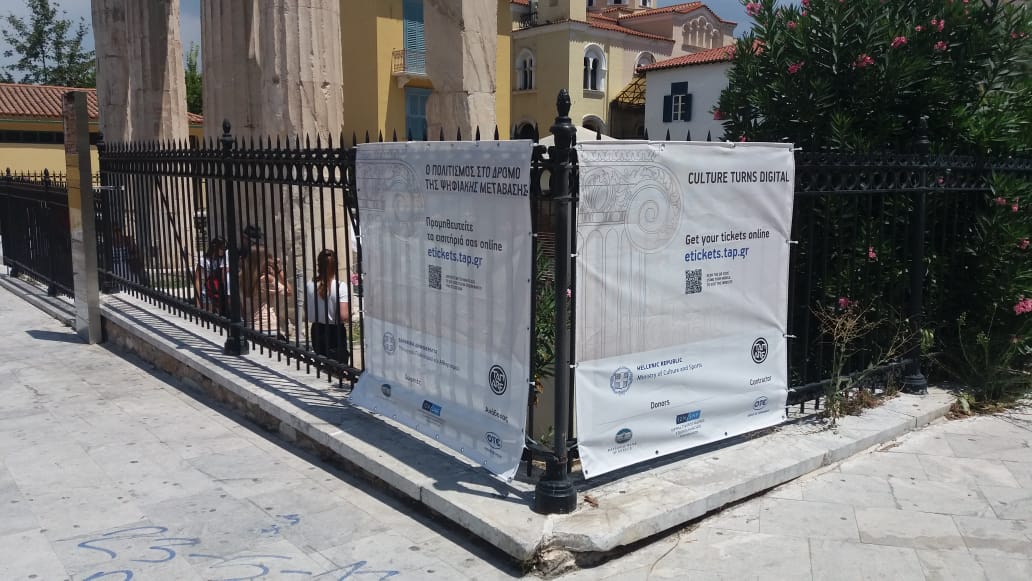 VSN HUB: What was your innovative contribution to your business field?

The e-ticket is the “ticket” to the future! The result of a successful partnership between the Public and Private sector.

A.CH. “What we have achieved with the e-ticket was the result of the joint cooperation of representatives of the public and private sector, people with different ideas and mentalities, as we designed its implementation by mobilizing our most creative forces; a collaboration of great importance.”

In spite of the chronic problems that ARF faces, such as being severely understaffed, which has been mitigated in the last few years by employing seasonal staff, this was the first time that a plan with specific timetable and deliverables was set by the Fund’s Chairwoman and it was managed in a way to overcome all obstacles and be completed on time.

A.CH. “We had to change our philosophy from the very beginning and overcome the perception, traditionally held by the overwhelming majority of the public opinion about organizations such as the Archaeological Resources Fund, that we remain attached to the past and embraced in a sterile bureaucracy; and that was a much-needed change.”

The e-ticket was officially presented last September at the 83rd Thessaloniki International Fair (TIF), where ARF participated with a high-tech stand. Its presence did not pass unnoticed and at the end of the Fair the Fund received an award for its participation and contribution to the exhibition. 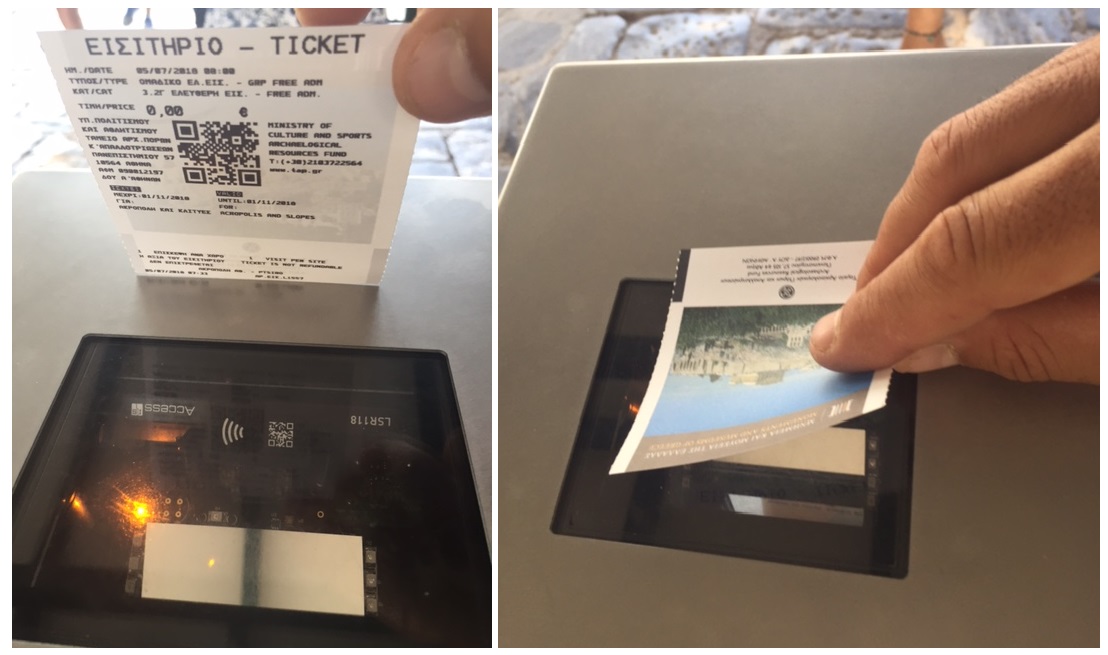 VSN HUB: In your opinion, which are the important values that can help someone gain self-knowledge in life?

A.CH. “The phrase ”know yourself” is inscribed in the Delphi oracle and was one of the basic values of ancient Greek philosophy. It is important at every moment and stage of your life, whatever you do, wherever you are, to always know who you are and why you are doing what you are doing.

Therefore, it is extremely important to be focused, to have a vision and be determined to inspire its implementation with strong will and “know-how”.

One should never be complacent, must evolve and be willing to learn.

To know your strengths, manage your weaknesses and reflect your beliefs.

Especially when you lead a project with high expectations, with regards to its impact on the overall society, what is essential is to gain commitment and lead the team with clear communication and inclusive management.

Finally, you should set your course based, in what ancient Greeks called: measure and moderation; keep everything in moderation. Avoid extreme ways in every facet of public and private life, but that does not mean that you will not exceed your limits in order to fulfill your vision.” 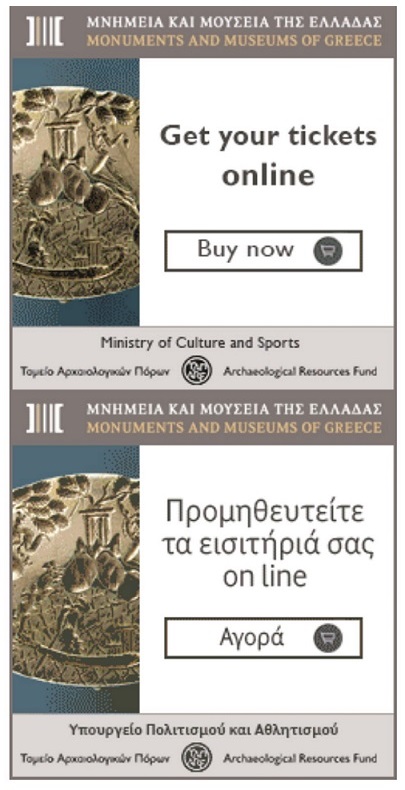 VSN HUB: As a Charismatic Leader, what are your mentoring guidelines to a new entry in your field?

A.CH. “It is crucial for a leader to be able to inspire the team, to motivate and to cultivate a “results-oriented” culture, along with creativity.

Other knowledge systems must be integrated;

Thus, one should be ready to stand for his/her vision and take necessary initiatives.

To be stable, cooperative, and part of a team, willing to learn and improve as the project progresses”.

VSN HUB: This interview’s goal is to inspire and lead to new partnerships.

A.CH. “Where there is willingness there is a way.

With strong will, knowledge, experience and partnerships we can overcome any difficulties, so that we can offer something tangible, measurable, modern and necessary to our society, to Culture”.