The  Revival of Colossus Project

George Barboutis is a visionary, innovative strategist and a passionate dreamer who deeply admires the History and the Cultural Heritage of Greece.

In the year 1999, he became the pioneer of the “millennium” project initiative for the creation of an emblematic monument inspired ideologically from the ancient wonder of the Colossus of Rhodes.

He introduced a groundbreaking cultural proposal, for the development of a world-class landmark intended to become an eternal offer of the island of Rhodes, a cultural contribution of Greece, as well as,  a millennial tribute to humanity upon the advent of the new era.

The main source of inspiration comes from the 21st-century re-visitation of the ancient wonder, aimed at embodying the symbolic values of the Colossus (world peace, unity, friendship, cooperation among people and countries ) and at becoming an iconic sight of Greek culture invested with an ecumenical ideological content.

“ George Barboutis: It is our responsibility to humanity and the whole of mankind, to make a great leap forward, by drawing inspiration from our historic past and by mobilizing our most creative forces. It would become a great opportunity to regenerate, and reignite our most depleted virtues, while sending a message that we Greeks with the small country and the huge history do not remain trapped in this dormant state, but we progress in an enviable and admirable manner, by transforming our national introversion into cultural extroversion.”

His inspiration address to all the people who share the same passion for the values of History, Culture, Philosophy, Art, Literature, and Higher Education. His request is open for everyone who feels that we should do everything we can to promote and protect the legacy of Culture.

So the message in this interview is for every Rhodian, every Greek, or any citizen around this world who is feeling “Philos” (friend) towards the Greek ideals. We want to make clear not only the vision but also the benefits of The Revival of Colossus.

What is the purpose of this project?

To offer Rhodes, Greece, Europe, the Mediterranean, as well as the rest of the world a Colossal landmark for the 21st century.

A global seal of the universal values of peace, unity, and cooperation among people, which will perpetually emit light and hope to the expectations and the inspirations of the future generations to come.

What is The Revival of Colossus Project?

Let’s start with the ideological concept behind the Revival of Colossus.

G.B.: The Colossus of Rhodes one the seven wonders of the ancient world is the eternal legend that bears the island of Rhodes, which ought to be creatively revived without the intention of reconstructing a sterile replica of the mythical statue carrying with it any anachronistic or archaeological implications.

Philosophy and ambition behind this project are to create a contemporary (21st century) feat of human accomplishment, inspired by the ancient wonder and to become an evolutionary and a modern successor of it, borrowing only the unique intangible attributes,  unparalleled symbolic characteristics and artistic values of the legendary monument.

It should become a new breakthrough achievement and a world landmark in our country. It should symbolize the values of Greek cultural heritage and promote the perpetual diachronic ideals of peace, freedom, and friendship among people and countries.

What is the Vision of this project?

G.B.: “Just like the Colossus was built as a tribute to the Sun God of Helios to celebrate freedom and peace, its future successor standing in the Mediterranean, at the crossroads of three continents, should become Rhodes’ tribute to the world, symbolizing ecumenical world peace and though its emission of eternal light, to send messages of hope and optimism for the future generations to come”.

How did you first engage in this ambitious project?

G.B.: I was engaged for the first time in the year 1999, when I had the honor to be officially designated  as Rapporteur of a “millennium” cultural proposal inspired ideologically from the enormous historic and symbolic values of the ancient wonder of Colossus, for the creation of a monument dedicated to the universal and ecumenical ideals of peace, unity, and friendship amongst people and countries . This new landmark monument was aimed to become an eternal offer of the island of Rhodes, a cultural contribution of Greece, and a millennial ‘tribute” of our country to humanity upon the advent of the new era.

This particular project proposal along with a 5-year business plan was submitted to the Municipality Council of Rhodes, winning a unanimous vote resolution.  Since then acting as a proxy of the Mayor of Rhodes and as a Project Leader of the Scientific Tourism Think Tank Committee of the Chamber of Dodecanese I presented the project in international conferences and fora contributing to the promotion of the idea and its subsequent phases for ideal implementation.

How to implement this project?

An Honorary Selection Committee should be formed consisting of prominent figures from the world of politics, culture, literature, arts, science, and technology, which should be placed under the aegis of the President of the Hellenic Republic to secure worldwide acknowledgment, international acceptance, and transparency of the procedures.

How can this project attract the necessary funds and resources?

G.B.: A significant amount of funds could be secured by contributions by Municipal and Peripheral Authorities, international organizations, the European Commission and UNESCO; but also through the activation of Greek and internationally prominent figures; in this respect, Hellenes of Diaspora and philhellenes could become ambassadors of the idea and lead an International Fund-raising campaign. 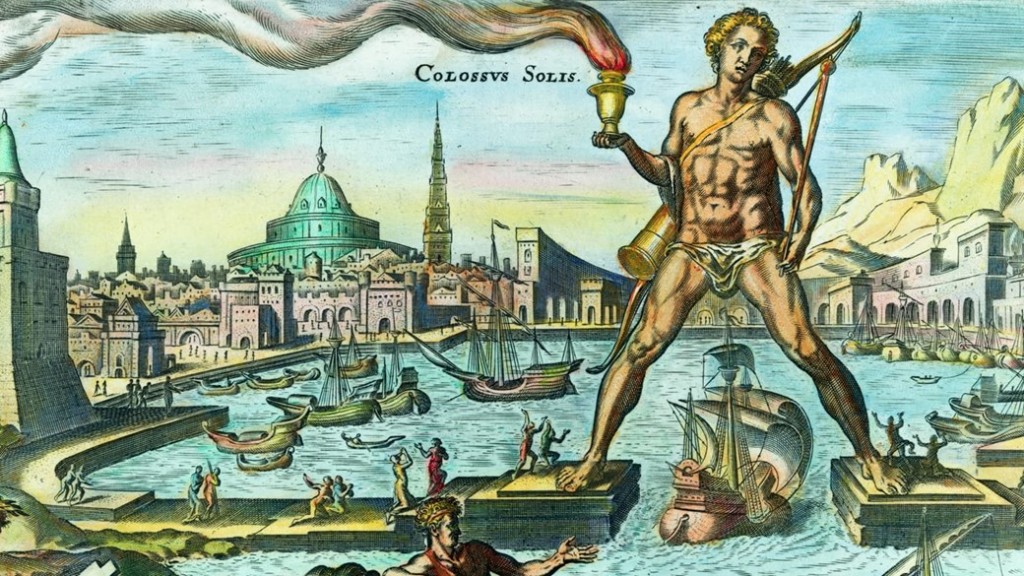 How the commercialization of the original idea will be avoided?

How can this be properly achieved?

G.B.: Following the relevant example of the revival of the Alexandria Library and to avoid any kind of commercialization, future project revenues should be reinvested to promoting Greek cultural legacy and the idea of global peace.

This would be achieved by creating firstly a contemporary Theme Museum of the ancient Colossus and its history, and secondly by establishing an International Center of Peace which would house an excellent cultural multipurpose facility, technologically advanced that will include a conference and exhibition center, an auditorium, and a concert hall that will be able to host international caliber meetings, activities and events.

Can you give us some relevant examples?

G.B.: To avoid ambiguity, I would like to mention only a few examples of landmarks that added prestige and admiration in the cities – countries that have attempted to create them:

And many other miraculous wonders that have offered significant added value, wherever they have been constructed.

How would you attract the interest of young scientists and researchers?

G.B.: It is truly a huge challenge to attract the interest of young scientists and researchers in this field. We, therefore, intend to create an Archaeological Research Center.

To make the effort sustainable for the future generations of young scientists in the field of Archaeology, it is proposed that a significant share of project revenues to be attributed to the establishment  of an  Archaeological  Research Center for the  Colossus and its history as well as an Academic Chair of the wonder , which would aid the studies of archaeologists  and researchers in issues related  to possible  location or future discoveries of the ancient wonder according to the new scientific data.

What is the ultimate challenge of this project?

G.B.: The ultimate challenge of the project and its visionary noble goal is to consolidate the belief among people that Rhodes deserves to claim, in the long run, the Chair of the “Neutral Venue of Peace” in the Mediterranean region and through the successful completion of this ambitious undertaking, the Revival of the Colossus, to maximize all eminent benefits and rewards.

How would Rhodes be benefitted in the long run?

G.B.: Rhodes, with its multicultural identity and prominent strategic location, is the ideal venue to bridge cultures and ideas, to establish free dialogue and promote the universal and diachronic ideals of world peace and friendship amongst people and countries. Such a project has the potential to offer a multitude of long-term sustainable rewards on both cultural and socioeconomic levels, especially during this period of crisis, instability, and hardship.

I am fully aware that it takes infinite courage, boldness, and valor to attain this noble achievement. After all, it represents a moral duty to historical Rhodes, an ethical debt to mythical Greece and an honorary obligation to humanity, to offer a memorable feat of such a scale. Much like the Olympic Games, it is something so Hellenic that the whole country has to benefit and at the same time so ecumenical that the whole world has to gain!

The Colossus of Rhodes was one of the seven wonders of the ancient world. According to historical records, the construction of the mythical statue started in 304 B.C. and was completed twelve years later in 292 B.C.

It was designed by the outstanding sculptor of that time Chares of Lindos and was 31 meters tall. It was built as a tribute to the Sun God Helios, or Apollo, protector of the city of Rhodes to celebrate freedom and unity after the failure of Demetrius Poliorkitis to conquer the island. It was made out of copper and bronze supplied from the war machines, which were abandoned at the outskirts of the city. It fell during an earthquake in 227 B.C. but it was left at that location for many centuries. In the seventh century, according to Byzantine sources, its pieces were transferred to Asia by Arabs and were sold as scrap metal (Mastrapas, 1993)

The Colossus, which literally means something gigantic, often has been depicted by artists and historians as towering over the historic port of Rhodes and as holding up a torch of peace – much like the Statue of Liberty in New York harbor. Even though adequate scientific proof of this is lacking, the same historical accounts say that it was visible to approaching ships from miles around. Historical descriptions praise the legendary statue but left its exact form and location an archaeological mystery. It inspired though numerous artists to provide drawings according to their imagination (Mastrapas, 1993 )

Publications about the Revival of Colossus by George Barboutis

Great books to read about this topic

George Barboutis is a Strategic Marketing Management & Communications Expert with more than 30 years of academic and professional exposure in most crucial facets of the Hospitality/Tourism industry.

He combines a multifaceted academic background from Institutions, Colleges and Universities in Greece, USA and France, along with an extensive professional and consultancy experience in various marketing and management business ventures. As a visionary and forward-thinking planner, he contributed with conceptual ideas and innovative projects that added value to enterprises, non-profit organizations, tourism destinations and stakeholders involved.