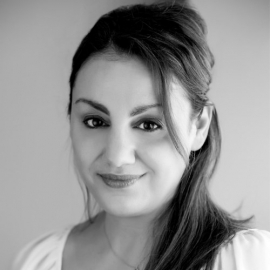 Christine McGuire has received a Bachelor’s of Science in Psychology and a Master of Science in Counseling Psychology, from the University of LaVerne, California, USA. She is a doctoral candidate in psychology with the University of Leicester in the UK, and her research is focused on examining the “Be Well” Model, a process model of change for well-being that she developed with a colleague. She has extensive experience in both therapeutic counseling, as well as within higher education, in which she has been actively involved for over 15 years. Up until she recently moved back to the US, she worked in Athens, Greece, where she had her own private practice and was also Dean of the Psychology Department for a private higher education College.

Ms. McGuire has established several departments and programs within private higher education in Greece, primarily with New York College, a well-known educational group that collaborates with Universities from around the world. Of her most noteworthy accomplishments, she founded the organization’s counseling department under the auspices of New Paltz, State University of New York. She also established the MA program in Clinical-Counseling Psychology offered in Athens in collaboration with LaSalle University, PA. USA, as well as the BSc (Hons) in Psychology program offered in collaboration with the University of Greenwich in the UK. Due to the relatively confined private higher education market in Greece, one could say that her role has been resolute in promoting the study of psychology in Greece by governing initiatives to bring esteemed programs of study from abroad. This offered students and ex-pats living in Greece educational opportunities that they might otherwise not have been able to access.

In addition to establishing and overseeing various programs, she was also responsible for creating one of the largest and strongest networks with healthcare organizations in Greece for purposes of internships, giving students the opportunity to do fieldwork and earn hours towards their degrees, and also to work on their professional development. In this effort, she also contributed in assisting many of these organizations to develop well-structured internship programs, which were not effectively in place to begin with. Apart from her administrative and counseling responsibilities, she has also taught several graduate and undergraduate courses over the years, and acted as adjunct professor for the University of New Haven, LaSalle University, and Empire State College, State University of New York. Course taught included a wide range of topics in psychology such as “Psychology of Adjustment,” “Theories of Personalty,” “Psychological Conflict Management,” “Ethics,” “Addictions Counseling,” “Abnormal Psychology,” “Organizational Behavior” and “Professional Case Seminar” for Clinical graduate students. She has also presented numerous seminars and workshops on: “The Change Process”, “Family Roles and Communication”, “The Effects of Stress on Health”, “Psychological Conflict Management”, “Substance abuse” and “Post Traumatic Stress Disorder”.

In addition to her graduate research, which dealt with the role that psychosocial support plays in the recovery of cancer (unpublished research), she has co-authored the book “Alages sto taxidi tis zoes” (Changes on life’s journey), Fytraki publications 2001, and “Emotional Prosperity-Emotional Bankruptcy: An Inside-Out Approach,” Plythora publications 2015. She has also been a guest speaker on various popular weekly television programs, where she discussed topics which included: communication within the family, divorce, violence, depression, suicide, and addiction.

In 2010, Ms. McGuire founded “Counseling Now” a private counseling center that offered a number of counseling and psycho-educational services and is partner in “Feel the Mentoring,” (www.feelthementoring.gr) a mentoring program that has been implemented in the EU funded project “Business Mentors,” in which she co-coordinated and taught. Her last endeavors before leaving Greece was to develop the very first counseling services for parents of gifted children, and was appointed as a scientific consultant for MENSA (high I.Q society). She continues to pursue her research interests which are focused on the process of adjustment, psychological well-being, and the importance of the role of psychosocial support in the recovery process.